This article has a collection of images to further represent its content. To see its gallery, visit Evangelion Mark.04/Gallery. 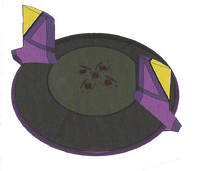 Code A and Code B are introduced during their battle with Evangelion Unit-02'β, serving as a defense mechanism for the Tesseract that holds Evangelion Unit-01. Sometime later, a variant known as Code C, referred to as the "Nemesis Series" by WILLE staff, assaults the newly-powered Wunder, but are destroyed shortly after.

The Evangelion Mark.04 Code A consists of a circular "core block" with two cores, with what appears to be the lower mid-section of an Evangelion growing from it, the legs of which end in sharp spikes which appear to be the Code 4A's main means of attack. The 4A also has a two small turrets attached to the underside of its "legs" capable of a short range energy attack.

The Evangelion Mark.04 Code B initially appears hidden in a cuboid box attached to Eva-01's tesseract, but quickly unfolds into several metallic "threads" capable of morphing into different shapes. It has a single core, which is contained in a small core block similar to the main body of the Code 4A. The core block can be moved along the threads at high speeds to avoid damage.

The Code 4C is a large drone which has a large number of cores contained in its core block, with metallic tentacles (similar in texture to the arms of Zeruel from the original TV series) sprouting from its top and base.

All the Evangelion Mark.04 units appear to have Evangelion shoulder pylons attached to their core blocks, although the number of pylons each unit possesses varies. The Code 4A has four pylons, while the Code 4B only has two. The Code 4C possess 64 pylons, which completely encircle its core block. All the units also share the same purple, yellow and black color scheme, similar to Unit-01.

The Code 4A and Code 4B are seen in the first six minutes of the movie, where Asuka, in her newly repaired Unit-02'β, and Mari, in her brand new Unit-08α, encounter them in space during the operation to recover the Tesseract containing Evangelion Unit-01. The Code 4A units appear first, first assaulting Unit-02' from afar with energy attacks, although the Eva's AT Field protects it. The Code 4A then attempt to engage Unit-02' at close range, flying at it rapidly by utilizing their A.T. Fields. Unit-02' attempts to stop one with its A.T. Field; however, the drone quickly starts "drilling" through the barrier. As stated by Asuka, the Mark.04 units are capable of generating an Anti A.T. Field, which allows them to penetrate an opposing A.T. Field at close range. The drone quickly tears apart the A.T. Field and unleashes its energy attack at close range, destroying Asuka's re-entry shield; however, Unit-08 snipes it before it can attack further. Several other Code 4A then attempt to assault Unit-02', but all are destroyed by Unti-08's support fire. Asuka finally reaches the Tesseract and attempts to bring it back to Earth; however, the Code 4B turns out to be concealed as part of the Tesseract and begins its attack, first utilizing a piercing cross-shaped white laser that cannot be neutralized by Unit-02's A.T. Field. The laser causes Asuka great pain and succeeds in blowing off part of Unit-02's shoulder armor. The Code 4B's core block travels along the metallic threads which seem to form its body, preventing Asuka from reaching it while she is still holding onto the Tesseract. The Code 4B then changes the configuration of its threads into an atom-like shape, producing several explosions and lasers which further damage Unit-02'. Asuka realizes that Unit-02' will be destroyed if the assault continues, but Misato instructs her to continue guiding the Tesseract towards Earth. In the end, Asuka yells, "Do something stupid Shinji!" after which a crack appears in the Tesseract, allowing Eva-01 to fire a laser from its eye which destroys the Code 4B's core block, causing it to explode. After the Code 4B is destroyed in a cross-shaped explosion, Unit-01's eye closes. The tesseract then re-enters Earth's atmosphere.

Later, a group of Code 4C attempt to launch an offensive on the WILLE fleet, appearing initially as bizarre cross-shaped pillars of light. The Code 4C's true form is revealed to be several drones hidden underneath the water, which latch onto the Wunder's wings as it rises into the sky using mechanical tentacles. The Code 4C are stopped by the Wunder's AT Field and annihilated shortly after by the Wunder's cannons.

The Evangelion Mark.04 units are all capable of producing A.T. Fields and manipulating them, although each have unique capabilities.

The Code 4A is capable of high-velocity flight by using its A.T. Field, allowing it to fly even in the vacuum of space. It is also equipped with an Anti-A.T. Field, allowing it to penetrate the A.T. Field of Eva-02 without any difficulty. It attacks by using its sharp spikes and Anti-A.T. Field to penetrate a target Eva's A.T. Field, before releasing a shotgun-like attack from two banks of cannons attached to its underside. The projectiles released are powerful enough to severely damage a re-entry shield.

The Code 4B is capable of using its metallic threads to reflect and manipulate light into powerful attacks, such as cross-shaped lasers and explosions. These attacks cannot be nullified by an A.T. Field. The Code 4B alters the arrangements of its threads for each attack. The Code 4B's core block is capable of moving along the threads at high speed, making it difficult to reach it and attack it.

The Code 4C units are capable of manifesting "pillars of light", strange cross-shaped red pillars of energy with what appear to be eyes sprouting from them. These pillars surround the target and destroy anything which touches them. The Code 4C units themselves are underwater, projecting an A.T. Field over it to prevent their removal. However, they can be pulled out the water with enough force. The Code 4C use metallic tentacles similar to the "arms" of Zeruel to latch onto the wings of the Wunder. Due to the large number of cores in its core block, the Code 4C cannot be destroyed in one shot; all the cores in the core block of a Code 4C must be destroyed to truly kill one.

Retrieved from "https://evangelion.fandom.com/wiki/Evangelion_Mark.04?oldid=39961"
Community content is available under CC-BY-SA unless otherwise noted.