This article has a collection of images to further represent its content. To see its gallery, visit Evangelion EUROII Heurtebize/Gallery. 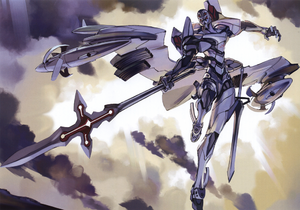 Evangelion EUROII Heurtebize is a unit appearing in Evangelion -ANIMA-. It is piloted by Hikari Horaki.

An Evangelion unit developed in Europe from the testbed body used for the Unit-02. As such, its appearence is nearly identical to Unit-02 except for the white coloring. It uses new technology from the previous Evangelion units like the N² Reactor from the Eva-02 Allegorica and two QR Signums from the Angel Carrier (one in each of its shoulder pylons). Its main armament is a lance capable of generating an A.T. Field from its tip. Heurtebize's soul is thought to be the one of Asuka's mother, Kyoko Zeppelin Sohryu because of the affiliation between the original Unit-02 and Heurtebize.

Retrieved from "https://evangelion.fandom.com/wiki/Evangelion_EUROII_Heurtebize?oldid=32558"
Community content is available under CC-BY-SA unless otherwise noted.