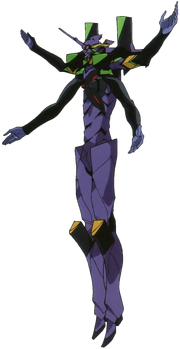 However, soon after they entered Central Dogma, they're attacked by Asuka in her Eva-02'γ with Mari in her Eva-08β as her support. Unit-13 fights back using its RS Hoppers and, with the help of the Mark 09, manages to reach the Spears. Despite Kaworu's discouragement, Shinji takes over the controls and pulls them from Lilith's corpse and the Evangelion Mark.06. In Kaworu's surprise, the spear of Cassius was missing and another Spear of Longinus appeared instead. This awakens the Twelfth Angel which was sealed inside Mark 06. Unit-13 begins to act on its own as it absorbs the Angel and awakes, becoming a Radiant Giant and rising at high speed from Central Dogma in the process. Kaworu mentions that he has been "demoted" from the First Angel into the Thirteenth, which somehow triggers yet another Impact and activates the DSS Choker.

After opening the Doors of Guf, Unit 13 initiates the Fourth Impact on its own. This pulls the Dark Moon from the underground and raises it to the surface. AAA Wunder arrives at the scene and rams the awakened Unit 13 at full speed to no effect. While Unit 09 hijacks the Wunder, Kaworu attempts to abort the Impact. He impales both spears into the chest of Unit-13, and the DSS Choker gruesomely kills him in front of Shinji's eyes. This incapacitates the Eva but does not end its Awakened state, and so Mari forcefully ejects Shinji's Entry Plug to terminate Fourth Impact and shutting off the Unit completely. This severely corrodes Unit 08's arms and also injures the pilot.

In the preview of Evangelion 3.0+1.0, Unit-13 is seen lying in a cross-shaped incubator with the two Spears of Longinus still impaled in it while Gendo investigates the unit. It suggests that Unit-13 still plays a role in the final Rebuild movie.

In terms of its overall appearance, Evangelion Unit-13 is near-identical to its predecessor Evangelion Unit-01, especially the NGE version. However, it has several (if minor) aesthetic differences. While it mostly maintains the green, purple and black color scheme, the green highlights are much less prominent, replaced with a few pale yellow ones on its knees and forearms and a much higher spread of purple and black across its body. The purple is deeper in colour compared to Eva-Unit 01. Also the entirety of its body has more detailed and segmented plates across it, and the armor in its legs has been completely redesigned, with slightly wider, almost square-shaped hips, larger knee pads and heel-like foot covers. Its helmet design still retains the ceratopsid dinosaur-like appearance, though in a much more detailed fashion, its horn is designed in crooked way and it has four glowing, bright yellow eyes, with equally colored lines coming from each eye. Another key difference, is the black, cross-shaped chest piece, with two red circles on top.

When entering in its Awakened state, its eyes and various highlights turn red, its center piece collapses and unveils a second set of arms and its pylons explode, revealing two crystallized wing-like appendages.

The Evangelion is also able to perform pseudo-evolution (as mentioned by Mari), similar to when Eva-01 goes into an awakened state when confronting the 10th angel. The eyes of the Eva enlarge, and the mouth opens to reveal a set of teeth. After absorbing the 12th angel, the whole body of Eva-13 turns into glowing-white, except for that the red decals on her chest turns green. Then, the crystal wing-like appendages extend further to lengths similar to the height of an Evangelion. It assumes the appearance of a giant of light, similar to Unit-01 and the Adams, and manifests two Halos. The Halos grow vertically, unlike the way it grows on Unit-01's head.

In pseudo-evolution state, Unit-13 is able to withstand a full ram from the AAA Wunder with no scratch at all when Misato attempts to seal Unit-13 inside an AT-field and blast the Eva with full power.

When Kaworu impales the two Spears of Longinus into Unit-13 and has been killed by the DSS choker, Unit-13's eyes reduce back to normal, and the two pair of eyes merge into one pair. However, the Eva still remains in pseudo-evolution state until Mari forcefully ejects Shinji's entry plug from the unresponsive Eva.

Much like Unit-01, Unit-13 is capable of entering an Awakened state and becoming a Giant of Light, when consuming an Angel's core. This led Mari to theorize that this unit is in fact one of the surviving Adams. The unit itself is much more resilient to damage, able to withstand a full assault from the AAA Wunder, Unit-02' and Unit-08, with virtually no damage. It's also much more difficult to stop the Eva in this state than it was with Unit-01, as it took it being stabbed with both Spears of Longinus, and having both its pilots disabled before it was finally deactivated.

Retrieved from "https://evangelion.fandom.com/wiki/Evangelion_13?oldid=40782"
Community content is available under CC-BY-SA unless otherwise noted.