This is a collection of images to represent a subject. For information on the subject itself, see Evangelion: 3.0 You Can (Not) Redo.

Asuka in a promotional poster

An enigmatic mural on the newest Eva store

Asuka with her new space helmet

Artwork of Shinji and Kaworu for Evangelion 3.0
Add a photo to this gallery

Another poster for Evangelion 3.0

Asuka in the trailer shown at EVA-EXTRA 08

The cover of the magazine IMA EVA dedicated to Evangelion

Advertisement for Evangelion 3.0 at Wald Cinema
Add a photo to this gallery 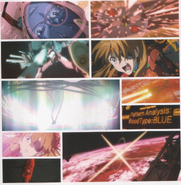 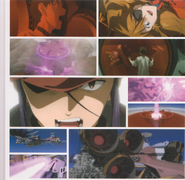 An Angel is destroyed at sea

The AAA Wunder takes to the skies

Shinji wakes up at NERV and encounters 'Rei' and Kaworu

Shinji bonds with Kaworu and learns the truth of his actions

Shinji learns about his mother and agrees to pilot Eva 13

Asuka pulls an unresponsive Shinji through the wasteland with Rei Ayanami.

Add a photo to this gallery
Retrieved from "https://evangelion.fandom.com/wiki/Evangelion:_3.0_You_Can_(Not)_Redo/Gallery?oldid=34046"
Community content is available under CC-BY-SA unless otherwise noted.