This article contains content from the EvaGeeks.org Wiki article Eva Pseudo-Evolution. Please view that page's revision history for the list of authors.
This article largely borrows its content from another wiki, such as Wikipedia or EvaGeeks. Substantial cleanup and reformatting may be needed.
There exists much information that should be added to this article. You can help by expanding it.
This page needs additional or higher-quality images. You can help by uploading some. 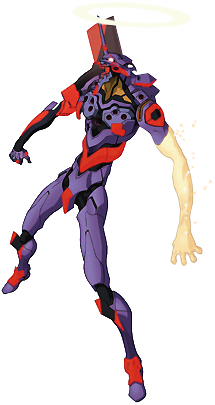 Eva Pseudo-Evolution (エヴァ疑似シン化, Eva giji shinka) refers to the change into a god-like being that Evangelion Unit-01 undergoes during Near Third Impact in Evangelion: 2.0 You Can (Not) Advance.

The Initial Arousal Phase (第１覚醒形態, dai 1 kakusei keitai) involves the Eva's innate powers being unleashed. The eyes, mouth, and any luminescent armor sections glow red; the A.T. Field's defensive capacities increase and it also becomes a potent offensive weapon; the ability to project energy using the eyes develops; and a halo manifests. The pilot's plug depth approaches the "Great Beyond Depth", exceeding a value of 180, and he starts to transform into an energy being at risk of being unable to return to normal.

When Shinji Ikari resolves to save Rei Ayanami (Rebuild), whose soul is trapped inside the core of the Tenth Angel, the Evangelion undergoes further changes in order to, ostensibly, satisfy this wish. The halo develops into a black hole-like vortex and energy wings start to manifest from the Eva's core. The pilot gains the ability to bridge from the entry plug to the Angel's core through the Eva's palms. According to Ritsuko, the Eva is "regaining its original form", "transforming itself into a divine entity close to God", and becoming an "energy condensate".[1]

Eventually, the Eva's major blood vessels become visible through the armor, and the heart begins to emit a radiant light.[2]

2nd Phase (The Radiant Giant) -- 第２形態（光の巨人）, dai 2 keitai (hikari no kyojin)—is fully manifest after a giant Rei (created by the Tenth Angel's remains fusing with Unit-00's core[3]) merges into Unit-01. Immediately, a glowing, cross-shaped incision forms over the GeoFront, with the vortex expanding overhead and pulling the ground toward it. Unit-01 is now a glowing giant with three red eyes, a dark "Angel" face, two cores, and giant Adams-like wings extending up toward the vortex: "energy condensed in the form of light, becoming a form of life no longer human".[4] Dark chakras go down the torso and limbs, and light pours from between the two cores.

The pseudo-evolved Unit-01 bears a strong resemblance to the Adams, which are similarly winged, red-eyed "radiant giants"—one of whom possesses a third eye, as well. Ritsuko says that Unit-01 is "regaining its original form", which falls in line with "pseudo-evolution"; that is, Unit-01 is not moving forward, but going backwards. Third Impact is also said to be a continuation of the Second, and Misato directly compares Unit-01's wings to the ones she saw fifteen years before. Potential implications is that Unit-01 is a direct clone of one of the Adams.

It is unclear precisely why Unit-01 becomes an agent of the world's destruction in response to Shinji's wish, although earlier in the film Rei said that "Eva is a mirror that reflects your heart." Further elaboration may also be found in Gendo's statement as he and Fuyutsuki look upon the devastated South Pole, "there are also those who desired this disastrous outcome. A world untainted by original sin that no man may enter." (Emphasis added.) What might be gleaned from this is that Third Impact did not simply initiate by chance; the desire for it existed in Shinji's heart, and Unit-01 set it in motion, similar to how Second Impact is said to be a result of human desire.

The music piece that plays during Unit-01's awakening is entitled "Sin From Genesis",[5] inviting comparison with Gendo's words about the South Pole being "a world untainted by original sin". The song played is called "Tsubasa Wo Kudasai", symbolizing Shinji's desire to save Rei. Shinji's wish is eventually fulfilled, in the expense of Near Third Impact.

Unit-01's color change from purple and green to purple and red may be an allusion to the Whore of Babylon from the Biblical Book of Revelation, who "was arrayed in purple and scarlet color".[citation needed]

In Evangelion 3.0: You Can (Not) Redo, Evangelion 13 enters in an Awakened state similar to that of Unit-01, however, it is implied that at least two individuals are needed to maintain the state. Differently from Unit-01, Evangelion 13 displays two wing-like appendages from it's shoulders and two Halos that are not connected to the Door of Guf. Mari, noted that this Unit was likely one of the Adams that survived. However the Unit awakes under its own will, but not under Shinji's like in 2.0. It takes the two Lances of Longinus being stabbed into the Eva's core and both pilots disabled to shut down the unit.