Dr. Katsuragi (葛城博士[?]) is a fictional character from the Neon Genesis Evangelion franchise. He is Misato Katsuragi's father. His first name is never stated in the anime and he appears only during a flashback sequence in Episode 12. He is wounded and dies during the Second Impact, but survives long enough to ensure that Misato escapes safely via an escape pod. He is also stated to have developed the Super Solenoid theory, after which the S² Engine is named.

According to Misato, her father was very focused on his work, rarely showing concern for others. Later, she would go on to have a relationship with Ryoji Kaji who is described as being just like Dr. Katsuragi. He is speculated to be the donor for Kaworu's DNA. See Identity of Kaworu's Donor.

In the Evangelion Detective video game, Misato Katsuragi's father is still alive, his name is Hideaki Katsuragi (葛城ヒデアキ), he was voiced by Shinji Ogawa. In the game, he is actually an Angel (That looks like an Ultraman character). After transforming into a creature, he faces off against Evangelion Unit-01, Unit-00, and Unit-02. He is defeated and disappears in a ray of light.

In Rebuild of Evangelion

In the Evangelion 2.0: You Can (Not) Advance movie, he briefly appeared dying in front of Misato's eyes, after he gave her the pendant she usually wears.

Hideaki Katsuragi turning into an angel 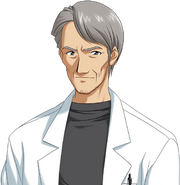 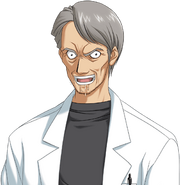