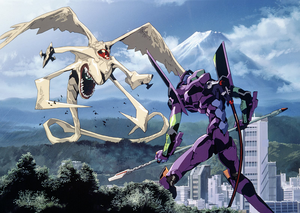 The Diemay Angel is a large monstrous white winged Angel designed by Satou "Diemay" Daimei of Tokyo, a fan who won a contest wherein original Angel designs were submitted to Gainax by viewers. The favored submission would appear in an original illustration by one of the Gainax artists. This Angel has not appeared in any other media as of yet.

Retrieved from "https://evangelion.fandom.com/wiki/Diemay_Angel?oldid=39515"
Community content is available under CC-BY-SA unless otherwise noted.