This article contains content from the EvaGeeks.org Wiki article Berserk. Please view that page's revision history for the list of authors.
This article largely borrows its content from another wiki, such as Wikipedia or EvaGeeks. Substantial cleanup and reformatting may be needed. 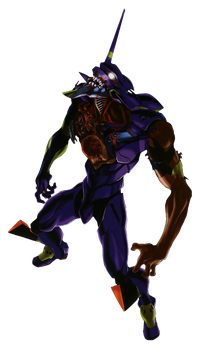 The term Berserk (暴走, bousou, lit. "out of control") or Berserker refers to a state an Evangelion can enter, in which it has gone beyond humanity's ability to control. While in this state, they display a savage, nearly animalistic battle frenzy in which their strength and capabilities dramatically increase. Some units that possess jaws bolted shut will typically force them open to let out a frightening howl.

Berserker mode functionality is beyond the current level of human scientific knowledge. Dr. Ritsuko Akagi disbelieved it when Evangelion Unit-01 first moves without power or pilot input during its sortie in the battle with the 3rd Angel. Her disbelief is expressed again when the same Evangelion later goes berserk against the 12th and 14th Angels, with its internal batteries fully drained. No known power source has been detected during these incidents, and as such, there is no understanding gained of what actually was powering Evangelion Unit-01 at these times. It can be deduced, however, that there must be a "limit" to the berserk-fueled independent movement, otherwise, the consumption of an Angel's S² Engine would have been pointless.

During said incidents, it would appear as if the Eva's resident soul acted on its own, bypassing its restraints. Although said behavior seems to conflict with Unit-01's resident soul Yui Ikari's behavior prior to her "death", this can be attributed to the fact that she is a mother protecting her child, one of humanity's primal instincts. Since the Evas are empty vessels before having souls salvaged into them, and these souls are the source of the Evas' "will" and "heart", it is ambiguous what could be directing the berserk Eva if not its resident soul.

NERV is very aware of the danger an out-of-control Evangelion poses and is extremely concerned about keeping the Evas bound and restrained at all times. In the case that one Evangelion went loose, the same mechanism that is meant to defend Tokyo-3 from the Angels can be put to use against a berserk Evangelion in order to restrain it. In addition to the unpowered berserker mode, several incidents of increased strength, savagery, or battle rage have been displayed by Evangelions.

Save for Mari Makinami Illustrious inciting Unit-05 into a semi-berserk state,[1] no known attempt has been made to artificially or intentionally initiate berserker mode. Instead, technological advances strive to achieve a similar level of power under controlled circumstances. The Dummy System, along with the Beast Mode of the Rebuild of Evangelion movies, result in similar states of increased strength and savagery, but as the resident soul is not in command, these do not constitute actual berserk incidents.

Unit-01 is the most notorious berserker. Its abilities to move both independently and without power are effectively established before its initial activation, when it moves its arm to shield Shinji from falling lights (in spite of being loaded with a Signal Termination Plug). Not long after, it goes out of control during its first sortie, against Sachiel, exhibiting a bestial and uncompromising "battle rage" that doesn't stop until the Angel is down.

Unit-01 brings about Leliel's gruesome destruction, and, later, mauls and devours Zeruel, although, unlike the incident with Sachiel, these both occur when the umbilical cable is disconnected and internal batteries fully drained. Shinji is not involved in any of the berserk incidents, being blacked out in the first two and dissolving into LCL in the third.

When controlled by the dummy system in Episode 18, Unit-01's behavior is very similar to berserker mode, but as its actions were directed by the Dummy System itself, not the resident soul, this is not a genuine berserk incident.

Unit-00 has two incidents (in episodes 05 and 14), both occurring when a pilot attempts to synchronize with it. During the activation test with Rei Ayanami, the Entry Plug is auto-ejected (apparently by the Eva itself) and Unit-00 continues to move undeterred until its power runs out. The second incident, involving Shinji Ikari, is extremely similar, except the Eva rejects the auto-eject signal. Unlike the Unit-01 incidents, in both of these cases the Eva shut down after it ran out of internal power, and did not restart using whatever power moved Unit-01 during its berserk incidents.

Unit-03 was infected by the Angel Bardiel during activation and initially behaved very much like Unit-01 in its first berserk incident, breaking open its jaws and bellowing, although this appears to have been the work of the Angel itself and not the resident soul. Despite being heavily mutated by the Angel, Unit-03 was ripped apart by a Dummy Plug controlled Unit-01, so the Angel appears to have been unable to harness the Eva's latent power and strength.

Unit-02 sets off a crucifix-shaped explosion and goes into a battle rage in Episode 25', performing incredible acrobatic feats and casting an offensive A.T. Field against attacking JSSDF units. After losing all battery power (the umbilical cable was destroyed by the JSSDF) and being brutally impaled by one of the Imitation Longinus spears thrown by the Mass Production Evangelion units, then mutilated and disemboweled by several of them, Unit-02 briefly goes berserk, bellowing in rage and attempting to move on its own before the Mass Production units descend to kill and consume 02.

Unit-02's berserk is different from those previously exhibited by Unit-01 and Unit-00 because the pilot, Asuka, appears to be in primary control of the Eva throughout. However, the fact that the Eva vocalizes during the JSSDF battle and while moving without power (both in and out of synch with Asuka) -- which up until this point has occurred only when the berserk Eva's soul has taken command—suggests that Kyoko's soul was actively involved on some level. This would also explain how Asuka could access many of Unit-02's higher powers.

In Episode 25', Unit-01 moves independently once more, setting off a crucifix-shaped explosion and growing "wings of light". From this point forward, Unit-01 seems to be completely under Yui's control.

Unit-01 goes berserk in the battle with Sachiel, identical to the incident in the original series, although the incident with the falling lights does not occur in 1.0. Unlike the TV series, both Misato and Ritsuko seem to know of the berserk state.

During battle with the Third Angel, Mari Makinami Illustrious becomes unable to properly synchronize with Unit-05's prosthetic limbs, and is forced to yield control of one to the Eva itself. Entering a semi-berserk state,[1] Unit-05 opens its jaws and helps destroy the Angel's core, self-destructing moments later.

The Beast Mode activated by Mari in Evangelion 2.0 resembles a berserk in many ways, but does not qualify since the Eva is not actually out of control.

Unit-01 enters a berserk-like state against Zeruel, signified by its eyes and neon green trim turning red. In this state, the Eva demonstrates several Angelic abilities including an extremely devastating energy attack from its eyes, reforming its severed arm from its A.T. Field then further morphing it into geometric shapes (not unlike Ramiel's transformations from Evangelion 1.0) before releasing a powerful shockwave and at the top of its power, manifesting a halo. Unlike in the series, Unit-01 doesn't devour Zeruel but rather establishes contact between Shinji and the Angel, allowing him to extract the soul of Rei Ayanami from the Angel's core before the Eva ruptures it and absorbs the fluid the Angel has turned into. After absorbing the Tenth Angel, Unit-01 receives a massive increase in power and turns into a glowing energy being, almost setting off Third Impact before being impaled and deactivated by Mark.06's with the Spear of Cassius.

This incident is distinctive in that the Eva is depicted as under the pilot's control for most of its duration, despite having many characteristics of a berserk incident. When Misato asked Ritsuko if Unit-01 has gone berserk, Ritsuko is unable to provide an answer. Whether or not Yui played some role in the events is disputed and not yet clear.

In Neon Genesis Evangelion 2, an alternate route has Kaworu retrieving and piloting the Evangelion Unit-04. During the battle against Leliel, the Eva is absorbed by the Angel. It eventually breaks free by going berserk and tearing the Angel apart.

In Evangelion: Another Impact, Unit-Null becomes berserk as it is started up for tests, becoming free of human will.