This article has a collection of images to further represent its content. To see its gallery, visit Armaros/Gallery. 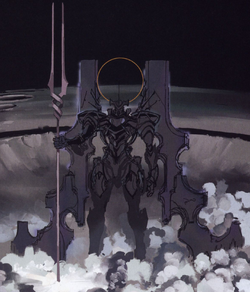 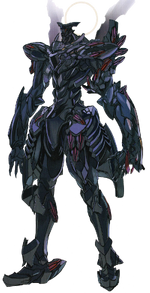 Armaros is a mysterious black Evangelion which appeared on Mare Crisium on the Moon shortly after the defeat of Angel Carrier at the hand of Super Evangelion. Transforming the Spear of Longinus into the Sphere of Longinus, it seems to be wanting to destroy humanity because of the failed Human Instrumentality Project. This however isn't quite sure as Armaros continued to transmit power to the QR Signum taken by NERV JAPAN from Angel Carrier .

The design for the helmet, particularly the horn, of Armaros is derived from early designs for Evangelion Unit-01 by Yamashita.

The name "Armaros" means "cursed one" or "accursed one". Armârôs was one of the leaders of a group of 200 fallen angels in the Book of Enoch.

Retrieved from "https://evangelion.fandom.com/wiki/Armaros?oldid=32533"
Community content is available under CC-BY-SA unless otherwise noted.