This article has a collection of images to further represent its content. To see its gallery, visit Arael/Gallery. 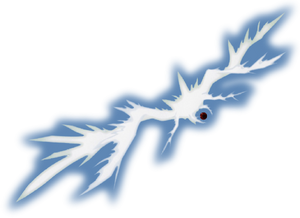 The Light of God

The Angel of Birds

Arael (Hebrew: אראל) is the 15th Angel. It is one of the most powerful Angels since it has the ability of penetrating the human mind, attacking the psyche of a living organism. It appeared in an almost unreachable place - out of the Earth's atmosphere.

The battle begins as the Angel is detected by NERV moving into orbit over Japan. NERV react by deploying both Asuka in Unit-02 as the primary defender equipped for long range firing (against orders, although Misato allows her to take point after she launches first anyway) and Rei in Unit-00 as the backup, while a storm rages over Tokyo-3. For a time the situation seems to be a stalemate, with the Angel holding in orbit just outside the defensive envelope of the long range weapons the Evangelions are equipped with, but the stalemate ends abruptly as a beam of light suddenly lances down from the Angel directly at Unit-02. Initially thought to be a particle weapon, it is quickly realized to be some kind of psychic attack seeking to probe the pilots mind, with characteristics somewhat similar to an A.T Field. Reflexively Asuka returns fire, but at such an extended range, her positron rifle bolts dissipate harmlessly. As the beam continues to tear at her mind, she fires again wildly, her shots hitting across Tokyo-3 before running out of ammunition. With warnings from Doctor Akagi that her mind will be permanently damaged if the attack continues, Misato orders her to withdraw, but a furious Asuka asserts that she would rather die then admit defeat, defying the order.

Rei, using a heavier Positron Sniper Rifle (possibly the same rifle used against Ramiel or a production variant of the same) then engages with a maximum power shot which succeeds in striking Arael, but at such extended range too much energy is lost and the beam is harmlessly deflected by the Angels defensive AT field.

Unit-02 is essentially immobilized at this point and Asuka is brutally and helplessly forced by the Angel to relive her worst childhood memories; her mothers suicide and dark childhood, starting to suffer a full mental breakdown, broadcast live to the helpless NERV staff. Shinji passionately pleads with both Mistao and his Father to let him deploy in Unit-01 to save her, although both Gendo and Fuyutsuki flatly decree that the risk of Unit-01 being contaminated by the Angel far too great. Showing uncharacteristic strength as Unit-02 shuts down and its life support reaches critical levels, Shinji continues to push his Father and even more surprisingly Gendo suddenly agrees that something needs to be done, ordering Rei to go to Terminal Dogma and retrieve the Lance of Longinus from Lilith.

An aghast Fuyutsuki quietly argues with the Commander as Rei descends to retrieve the Lance, pointing out that SEELE will never allow the Lance to be wasted in such a way, but a calm Gendo asserts that the need is the only justification and that there is no other way to defeat this Angel. None the less it is clear that Gendo is happily killing two birds with one stone; eliminating the Angel and ridding himself of the Lance in a perfectly justifiable way, the Lance seemingly a threat to his own plans but key to his rivals.

Rei returns to the surface with the Lance. Hurried calculations are made and after a ten second countdown, Rei throws the Lance with considerable force, the projectile ripping through the clouds with enough force to completely dissipate the storm above Tokyo-3 as it homes in on the Angel and tears through its AT field and body in an instant, annihilating it.

Arael's appearance is that of a multi-winged creature made of intense light that hovers around Earth. Its Core, which is rather difficult to see due to the Angel's own glow, is held outside its main body by two smaller wings. Its wingspan seems to be several times larger than an Evangelion, based on its size relative to the Spear of Longinus, though Arael and an Eva never physically meet directly. Arael's A.T. Field possesses the unusual characteristic of emitting a beam of light that analyzes the human mind. It is uncertain what Arael's intention was after analyzing Asuka's mind and gathering data about the human race.

After Arael is pierced by the Spear of Longinus its body breaks down and swirls into a vortex, finally vanishing in a pinpoint of light. An outburst of red blood is briefly visible upon the Spear's exit.

In Other Media Edit

Arael makes no physical appearance within the manga, but is noted as having already been taken by Israfel.

Retrieved from "https://evangelion.fandom.com/wiki/Arael?oldid=40055"
Community content is available under CC-BY-SA unless otherwise noted.