This article is about the four "Adams". For the first Angel, see Adam.
This article has a collection of images to further represent its content. To see its gallery, visit Adams/Gallery. 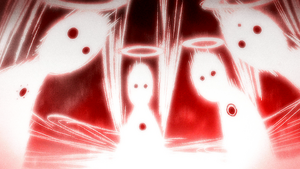 The Adams[1] are four giants of light that were present at Second Impact in the Rebuild continuity.

The Adams are all slightly different in appearance, but all possess halos and wings. Fifteen years after Second Impact, the four crosses they generated are still present in the center of the crater at the South Pole. The luminous being that Evangelion Unit-01 pseudo-evolves into at the end of Evangelion 2.0 to "continue Second Impact" may provide some indirect information regarding the Adams' natures and abilities.

In Evangelion 3.0: You Can (Not) Redo the Evangelion Mark.09 is called an "Adams' Vessel" and Evangelion 13 is referred to as one of the surviving Adams. The implications of these statements are unknown.

One of the Adams has a third eye. This motif reappears with the Unit-01 as the Radiant Giant at Near Third Impact. While some kind of link between the two seems implied, there is no way at present to know what that might entail. A three-eyed giant is present in the IPEA's logo, as well.

Retrieved from "https://evangelion.fandom.com/wiki/Adams?oldid=39931"
Community content is available under CC-BY-SA unless otherwise noted.