This article is about the First Angel in the original anime. For the four entities of the Rebuild continuity, see Adams.
This article has a collection of images to further represent its content. To see its gallery, visit Adam/Gallery. 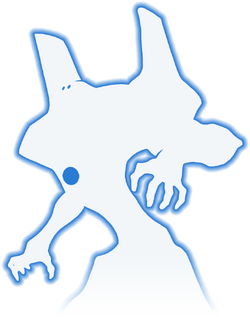 Adam (katakana: アダム; Hebrew: בראשית ,אדם i:xxvi) is the designation of the First Angel, the first of Earth's two Seeds of Life and the progenitor of the Third Impact indirectly through the actions of the Seventeenth Angel, but directly through the actions of a member of the Eighteenth Angel (a Lilin, specifically, Shinji Ikari). Adam is also the genetic basis of the Evangelions, although this is not the case for Unit-01, as it was built from Lilith.

Adam was created by the First Ancestral Race billions of years ago and sent to Earth within the "White Moon" to fill the Earth with its progeny, the Angels. However, before Adam could accomplish its mission, the "Black Moon" transport containing a second Seed of Life, Lilith, accidentally crash-landed onto Earth. Two Seeds are not meant to exist on the same planet, and in the event that this accidentally occurs, a Spear of Longinus, which all Seeds are accompanied by, should render one Seed inactive. However, the Spear accompanying Lilith was destroyed in the crash, leaving Adam's Spear as the only functional one on Earth. Thus, Adam was placed into suspended animation by its own Spear of Longinus, and the progeny of Lilith populated the planet instead of Angels.[1]

The inert Adam, and the Spear that impaled it, were later discovered by the Katsuragi Expedition Team. Adam, and its S² Engine capable of creating limitless energy, became the subject of intense scientific inquiry. This culminated in the Contact Experiment, of which little is known beyond the involvement of a human "donor", DNA "diving" into Adam and "physically fusing", and Second Impact being ushered in as a result. It is heavily implied that the experiment produced the being that became known as Kaworu Nagisa.

In the Contact Experiment's aftermath, Adam manifested an Anti A.T. Field which destroyed all surrounding life, altered the local atmospheric elements, and opened its Doors of Guf — all actions implying the reawakened Adam was attempting to reclaim the Earth.[2] The Katsuragi Team's attempt to subdue Adam with the Spear of Longinus ultimately failed or was only partially successful. Adam killed the research team before it lost control of its S² Engine transforming it into the "Giant of Light" and ultimately triggering its own self-destruction. As Adam exploded, four massive wings (likened to those of a "devil", "akuma", in the script) manifested and extended as high as the stratosphere. This loss of control was possibly due to the Katsuragi Team's use of the Spear. The worldwide annihilation of Lilith-based life was averted, but not without cost: a global calamity known as Second Impact.

The actual effect brought on by the earlier utilization of the Spear caused Adam's reversion into an embryonic or egg state, rather than being destroyed completely.[3] Adam's soul was separated from its body, presumably when its core was destroyed in the explosion.[4] SEELE retrieved both Adam's soul and what remained of its body from the "Dead Sea" that has once been Antartica. While the former was salvaged into Tabris, the embryo became the subject of the Adam Project and the basis for the "Adam Revival Project", better known as Project E, which aimed to create Adam copies, or Evangelions.

In 2015, the embryonic Adam is clandestinely obtained by Ryoji Kaji, smuggled into Japan via the United Nations Pacific Fleet, and delivered to Gendo Ikari[5] at NERV Headquarters. He notes:

"It's already restored itself this far. It's frozen inside dura-bakelite, but it's still alive. Without a doubt, this is the keystone of the Human Instrumentality Project, isn't it?"[6]

Exactly what Kaji means by "keystone" is ambiguous.

Adam is a crucial element in Gendo's own scenario for Third Impact, wherein he intends to use the "forbidden fusion of Adam and Lilith" as a means to achieve reunion with Yui. At an undisclosed point, Gendo has Adam fused into his right palm, and, in the moments before Third Impact, he inserts his hand into Rei. However, rather than carry out his wishes, Rei severs and absorbs Gendo's arm — fusing with Adam, but rejecting Gendo. The "forbidden fusion" is complete when Rei returns to Lilith.

The resultant "Gestalt entity" is Lilith-dominant, only momentarily splitting into "Adam" and "Lilith" parts shortly before Unit-01 transforms into the Tree of Life. Adam manifests in the form of a giant, ghostly white Kaworu Nagisa, which, together with subsequent appearances of the Kaworu avatar, implies that Gendo had salvaged Adam's soul back into its body shortly after Kaworu's death.

The conglomerate being of which Adam became part dies when Shinji rejects Instrumentality. In spite of this, Lilith seems to continue existing in some form afterwards. Adam's own fate, however, is unknown.

Adam's distinct physical features are never clearly shown, since, in the available glimpses of Adam's adult form, it is either partially covered by ice or in the form of a glowing silhouette, the "Giant of Light". However, it is visibly a giant humanoid with a morphology strikingly similar to that of an Evangelion, which is appropriate considering the genetic relationship between Adam and the Evas.

The Giant of Light is observed with shoulder pylons, although a still-shot of the Katsuragi Expedition excavating Adam[7] confirms that the pylons were not initially present, implying that—similarly to what would be done with the Evas later—they were added as restraint mechanisms by the research team.

Adam possesses the ability to manifest translucent "wings" ("Wings of Light"), which it begins to spread before reaching the surface of the research base. These greatly enlarge and split into four upon Adam's explosion.

In Sadamoto's manga, Gendo devours the Adam embryo whole, and later sprouts an eye on his palm and develops the ability to deploy a defensive A.T. Field. But once he attempts to fuse Adam with Rei, she severs Adam from his hand and merges with Lilith, completing the forbidden union between the two Seeds, but leaving Gendo behind. Once Third Impact is stopped and Instrumentality is rejected, Lilith disappears, leaving Adam's fate unknown.

An entity equivalent to Adam is not yet confirmed for the Rebuild continuity. The role of the giant responsible for Second Impact has been given to multiple Adams, while that of Adam's embryo has been transferred to Nebuchadnezzar's Key.

Adam appears in the second volume of the manga and reappears again during the Angels' attack in Tokyo-03. He then tricks Shinji into a dream world but Shinji breaks free after Kaworu sacrifices himself, seemingly destroying both in the process. Due to their absence, this version of Adam seems to take aspects of Lilith, Armisael, Leliel, and Arael.

Retrieved from "https://evangelion.fandom.com/wiki/Adam?oldid=39536"
Community content is available under CC-BY-SA unless otherwise noted.